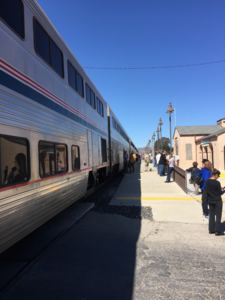 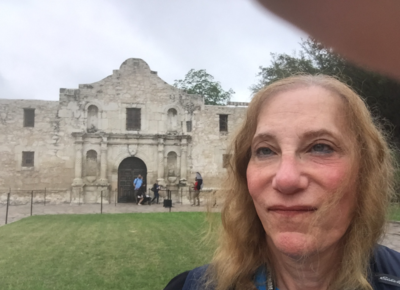 I diddle-daddled in my room until 11:30 and packed up and formally checked out of my room and left my bags with the valet for the day.   I headed down to the Riverway looking for a late breakfast, and as I sat down for my Huevos Mexicana, it started to rain, and rain pretty hard.  I was lucky, being both outdoors and under cover as I watched the people go by in the rain.  It kept raining and I really had no place to go, so a few minutes after the eggs were completed I decided to nurse a nice breakfast beer for another hour.  By the time I had enough of sitting, the rain stopped and at least a small opening in the clouds occurred for a bit, and I decide to walk over to Hemisphere Park and take the elevator up the Tower Over America.  Not really on my bucket list, but another touristy thing to do.

​Train day...3 mails on the train and got to sit and chat with a variety of folks.   Perhaps even some networking, but we will see about this in the future.  I spent more time in my economy sleeper room than the observation car , and watched the seemingly endless landscapes.   Changed 2 time zones on this trip and got a bit tired of train food. (sorry Amtrak)   Actually got some sleep oaths leg as I arrived in LA's Union Station on Day 13 at 5 AM 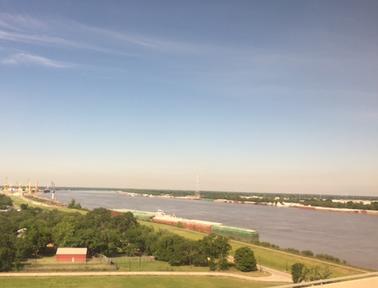 I looked out the window early Wednesday morning and there was still no sign of the sun.  Variations on the color gray filled the sky and the ground  was dark with dampness.  I went back to sleep as I learned that checkout time was noon.   This day was a puzzle as I knew I had to get to the train station around 11 PM to get on to the next leg of my journey - the 26 hour trip  to LA.

​I was thinking about doing a Segway tour in the afternoon, as I had such a great experience in Atlanta, but the iffy weather held me back from making a reservation for it.  Oh, well...just not meant to be.

The peeps on the train kept saying that the train is usually a good half to 1 hour early, but not this trip… once again a few freight trains had rail priorities.    I am now getting pretty used to this event.    It was a long day – about 15 hours on the train, but it was not that big a deal.    We got to the San Antonio station about 20 minutes behind schedule at around 12:30 AM.  It was already Tuesday morning.  Luckily, my UBER only took a minute to get me and the hotel was only 5 minutes away.   Yay!!!!


I stayed  at the historic Menger Hotel across from the Alamo.  This place was actually gorgeous.  The plaque said established 1859, but it was wow! 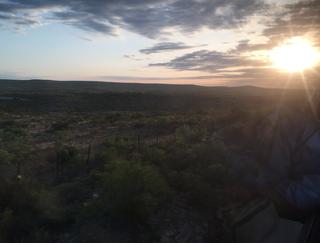 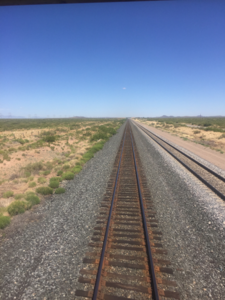 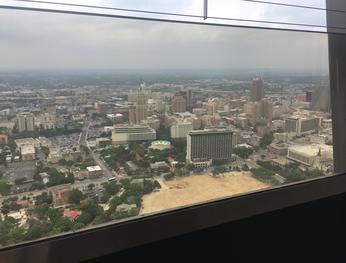 This was going to be a long day trip scheduled 9 AM to around midnight.   At least I would have my own roomette, and economy bedroom, and there was an observation car handy.  This way I actually managed to have meals on this leg of my trip.   Sadly the meals are not much to write home about so that is all I will say about them.

It was a beautiful morning so I headed off to the observation car and was inspired to finish off a new Huffpost blog and send it out before noontime.   Check my blog page for "Pinch Me" 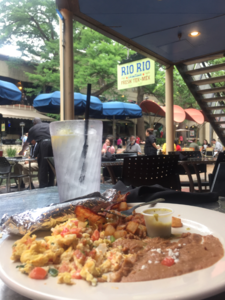 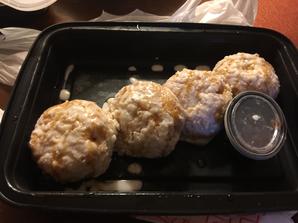 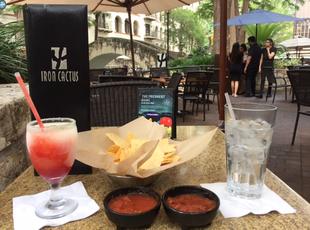 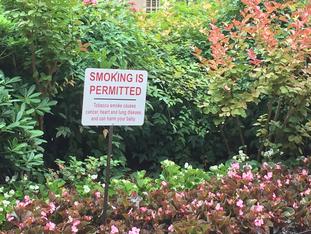 Then the “primary objective” of stopping in San Antonio was to go to the Alamo.   Yes, I grew up in the fifties and was weaned on Disney’s version of Davy Crockett.   Here I learned so much more of the real history.

Again, my train peeps told me to get the audio tour and I think this made the visit entirely.   They said that it was about a 45-minute tour but I was enthralled and spent more than twice that time, even in the courtyards when the rain came down.

There was so much to reflect upon as the story of the people fighting there for the freedom they believed in was unavoidable mapping to these crazy days for the LGBT community that I am part of.   I am still weighing the difference and the similarities between the times, and what I, myself am willing to do to fight for the freedom and rights of people like myself.

By this time I was well touristed out in San Antonio and decided to head back to the hotel to relax in the garden area and the pool area until 6 ash when I went over to the mall, grabbed a slice of pizza ( I know, pretty boring and caught another movie - this time The Circle, and when that was over grabbed my bag and headed to the train station.   I was able to get on my train at 11 PM, the bed was made, and headed off for the night as the scheduled departure was 2:45 AM.

​I was headed to the left coast.  Amazing! 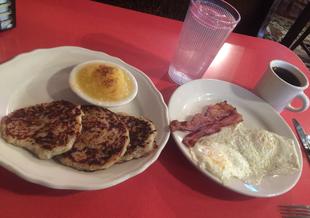 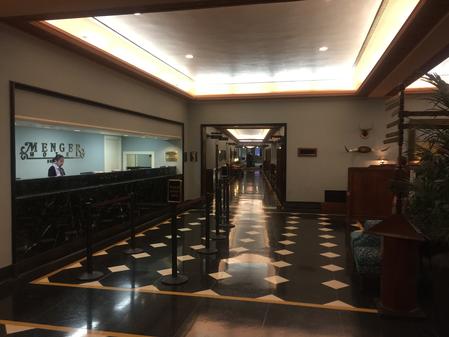 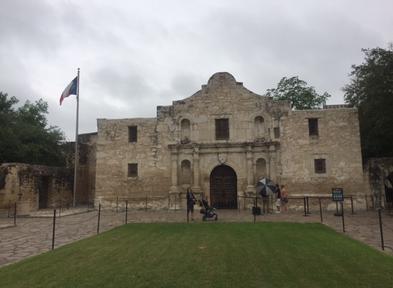 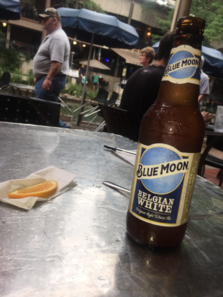 It was looking pretty gray and already wet after my Alamo tour so I decided to pop into theater next door and catch a showing of Guardians of the Galaxy.  After that I headed down to the Riverway (also on the bucket list)  did the boat tour, and headed to the recommended restaurant for some enchiladas.  I was pretty stuffed with all that food, but when they offered dessert a was compelled (I know....) to take a order of the Mexican donuts to go!  Would it be sacrilegious to say they were better than the beignets from a few days earlier... 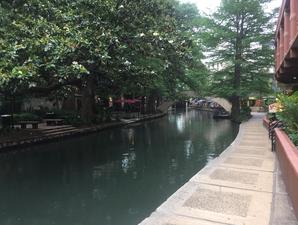 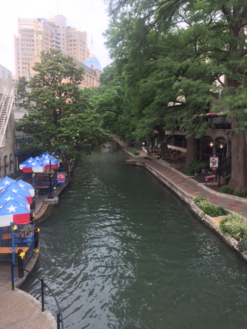 Day 11, Wednesday May 10 - More shades of gray and checking out 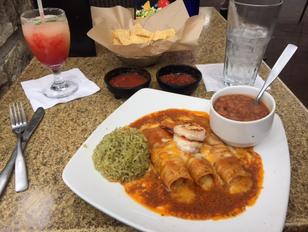 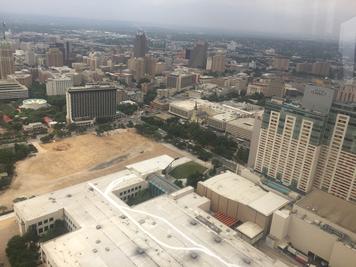 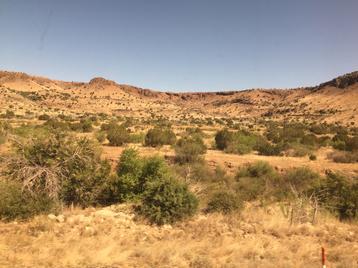 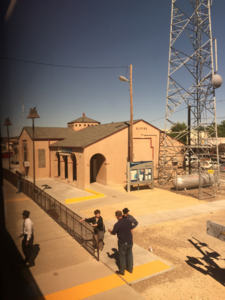 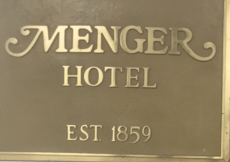 Let me start off with the single image I will always have of San Antonio, or maybe even burnt into my lungs.


It seems like everyone in San Antonio smokes.   I have not, in recent memory remember being outdoors and constantly being surrounded by second hand smoke.

The sign above is in the small garden area of the hotel, and it was even hard for me to sit comfortably there.   There was no smoking allowed indoors anywhere but the “great outdoors” was another story.

It was so many different shades of gray as I woke and the weather report promised scattered showers throughout the day.   My first goal was to find breakfast.   One of the attendants on the train gave me a quick rundown of where I should go to eat, and for lack of any better plan I decided I would be a happy follower.  I think my planning and hotel picking worked out well, as I was just a few blocks from everything I wanted to see.  Off to Shiloh’s Deli for potato pancakes for breakfast.  I knew this trip would have me eating much too much food.   Pretty sure when I get home, there is another Whole 30 detox in my future!