I had the expectation that this was going to be a long day.  I was scheduled to get on the train in Atlanta at 8:38 AM and arrive in New Orleans at around 7:30 PM  this included a time zone change so it was a 12 hour trip.

​On my earlier train ride, someone introduced me to asm.transitdocs.com  which shows all the long haul trains and how well they are doing on their  schedules.  I woke at 6 AM and checked out the train I was picking up and found it was already close to 3 hours behind schedule. It was already raining in both Atlanta and New Orleans.   Glad this was a travel day.   The planned day was getting  bit longer.  Also, my BFF  (for those who may have read my book, No!  Maybe? Yes! Living My Truth, you may know a little bit about my BBF who knew me before I transitioned and we still are the best of friends.  For here, I will just use her initial "T") was flying down to NOLA to meet up with me for the weekend, and her plane was going to arrive at 5:30.

My train actually did not leave until 10:45, and it was a long day in coach when I arrived at around 10 PM in NOLA.     The good news was that another friend who live in NOLA for many years  had to make an emergency trip due to the sudden death of one of her friends.  This friend, "P" offered to meet T for dinner since I was going to be so late, and it all worked out well. 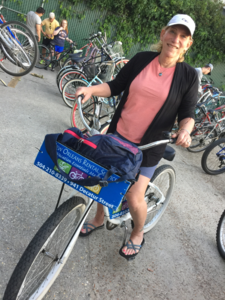 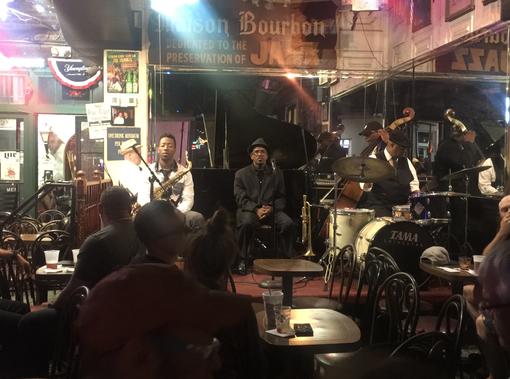 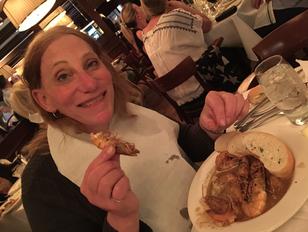 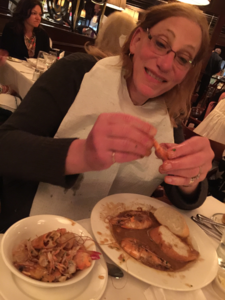 Perhaps I am a spoiled New Englander, not quite knowing that ordering shrimp meant the entire critter, and I would have a bit of work to do -  but when the waiter came around and tied a bib around my neck, I knew it would be another  of the day's adventures.  ..and a pretty marvelous one at that!

These shrimp were gigantic with a taste to match.  In fact, they were the tastiest and like nothing I ever had before.   I did save room for the caramel pecan pie  -  also fabulously delicious.  High marks for Mr B's...

.....and then a walk on Bourbon Street.  It was hopping and even though it was not Mardi Grace, I remained an adult, and did not take part in the "Beads for Boobs" game as beads were raining down from the balconies.

​We had a plan. Grab a bite in the hotel, bike down to the levee on the Mississippi on what is called the Riverway and then bike our way back to the Jazz festival.  After Friday's reconnoitering, we thought we had a plan.  We parked our tarp as soon as we got there at the Acura stage where Stevie wonder would start around 5 PM.  Then we were able to walk all over, from stage to stage, and try some different foods all around,  The day was pretty hot.  we made it to the Jazz , Blues and Gospel tents, and the Cuban stage and a few other venues.   Wish we had some chairs but we managed.

By the time for Stevie Wonder, we were landlocked in a sea of people.  ​ 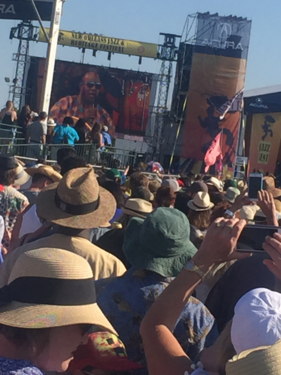 After the last show it took a while to get through the crowds,  get our bikes and head back to the hotel.   We chose to bring the bikes up to our room.

We conformed that we would go back to the festival on Saturday hoping to see Stevie Wonder at the end of the day.  We  had previously had early dinner reservations at a place called Mr. B's Bistro, which T knew about from a previous trip here.   We walked over and cancelled our reservation but managed to get seated for dinner.   I ordered BBQ shrimp which, silly me, thought would be like shrimp on the barbie.   I was warned I would be making a mess. 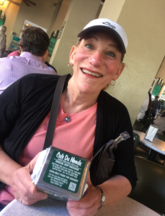 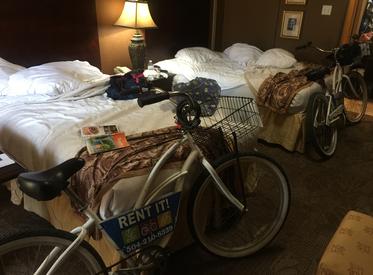 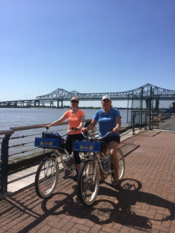 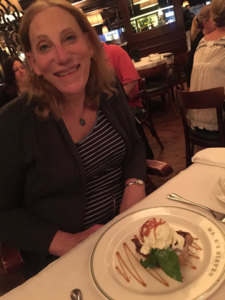 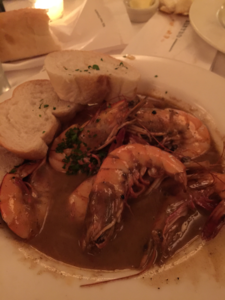 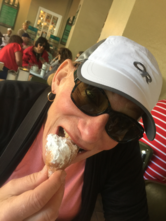 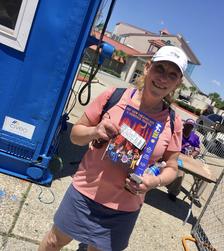 ​Dinner was uneventful, but we did manage to get to Maison Bourbon for some "real" old time New Orleans Jazz.

​I lazy tourist day around the french Quarter, included a little shopping in the French Market, more shrimp to eat, a buggy tour, and walking all around including Jackson Square and a few final beignets.  T headed back to Boston, and I am packing for another long travel day on Monday - 15 hours to San Antonio. 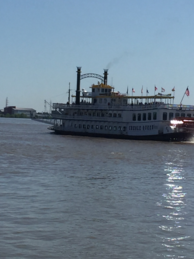 The next morning, we all met early at Cafe Du Monde (obligatory trip) for beignets.

"P" was a wealth of knowledge as we discussed our plans on going to the jazz festival and how would be the best way to get there.  We were thinking about renting bikes, and "P" confirmed that was by far the best way to get there.   Turns out the Fair Grounds is only about 2 miles from the French Quarter, where we were staying, so by late morning we found ourselves on "Cruzers" for the next two days.   I highly recommend this mode of travel in NOLA and the festival.   Can't beat it.  You can see the fenced in area for bikes to the right.   Just remember to buy cold water from all the hawkers before you get into the ground.

​We found our way to buy tickets , get through the security line (long) and spent the next hour or two overwhelmed with the size and scope and how to choose food and what to see.   We learned that we had to buy a tarp to layout on.   We did not really hunker down to music until around 2 PM but then slowly started, only started, to figure out how this place works.    T and I were undecided who to see for the final show, but we opted for Earth Wind and Fire over Dave Matthews & Tim Reynolds.

​For the who know that I time travel with music, the EWF show was amazing.