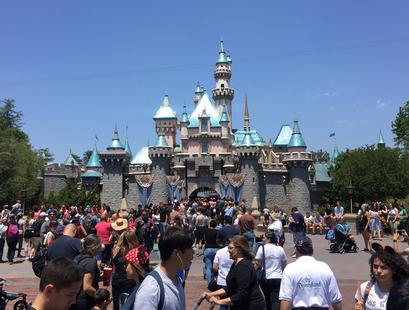 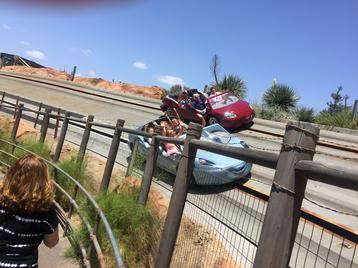 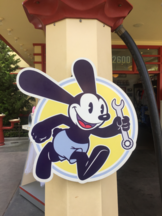 I got to the park when it opened at 9 AM and just started to get on lines.   It was still cool but there was no line on the rafting ride.  Got thoroughly wet to start the day and then followed up with Soaring around the World.  I made my way to Paradise Pier, and also grabbed a fastpass for the World of Color, which would start at 9:45 PM.

There were a few rides that I jumped on that after, I was kind of glad that it was over.  One was that flying swing shown above.   However, that big grin was back on face at Pirates of the Caribbean and The Little Mermaid, and loved the rush of the Racers in Car Land.

I took a little break around 5 PM and went back to the hotel for a quick rest, and then returned at 8 to grab a bite in Downtown Disney and head over to the World of Color.    I was close to the water, where it said I would get wet.   Actually it started to rain a bit during the show, so I start and end my day being wet.   This show was totally AWESOME.    Yes, that lost bucket really did get filled up this weekend.

So,  I have now gone to Disneyland.  It has been over 60 years since I first had that dream.

I really do not remember if I ever wished upon a star, but now, that dream has come true…

I had mixed feelings as I got off the shuttle and arrived at Disneyland.  I generally am not big into rides and amusement parks, but this was something different, I kept telling myself this….

Part of it was not knowing what I was walking in to or how it worked, but it did not take long for me to learn.

I purchased my 2 day, 2 park ticket and headed into Tomorrow land.  I learned about fastpass, and how long I would have to wait in line.

More surprisingly, I learned that the marketing team at Disney, who describe Disneyland as “The Happiest place on Earth,” got this one absolutely right!

As I walked around, and especially after each ride I went on, I found a grin on my face that would not go away.

I managed an 8-hour day going through the park and found myself enjoying the rides more that I had expected.  I did not stay for the fireworks on Saturday, as I headed back to the hotel, but I planned on a longer day on Sunday. 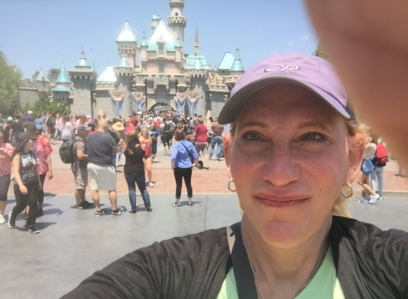 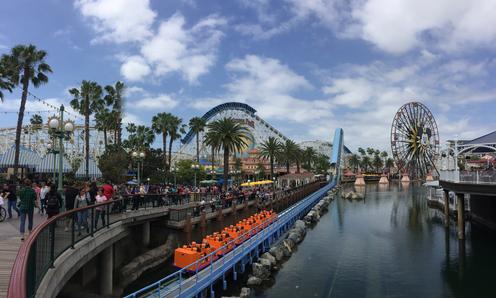 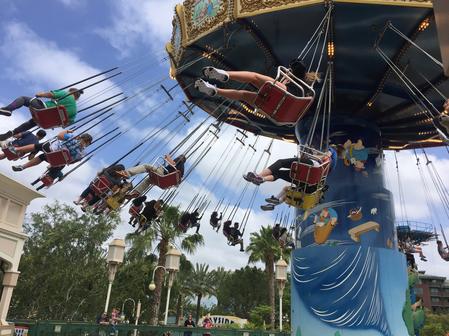 Barrels of Buckets
As I am about two weeks into this trip,  and sharing that I am checking off various items on my bucket list, I have surprised myself a bit to realize that I have a multitude of different buckets that are being addressed.

In the first blog above Countdown,  I mentioned the following…

The lost bucket list from my childhood will soon see the light of day.

I now understand that some of what I have done so far is not only filling the lost bucket list from my childhood, but a few other buckets that I created at different stages of my life.

Going to the baseball games were dreams that, if I think about, were created when I became a parent and thought it would be great to combine baseball and vacations.   I have done a few, but really not all that many.   Actually, since I became single again in 2001, I have done a few more of these than before, but they are more opportunistic on trips than focused destinations.  The same is true on this trip where the opportunity for three new stadiums, is an opportunity that I am going to take advantage of.

Now, the story is somewhat different for going to the Alamo and to Disneyland.  I grew up in the fifties, and was glued to the Wonderful World of Disney and the Mickey Mouse Club on my family’s old Dumont TV.  It was 1955 and I was 8 years old when I first watched Davy Crockett and his coon-skin cap.  What an impressionable age that was for me, still watching Roy Rodgers and Gene Autry on TV also.   This was the same year that Disneyland opened, and I am pretty sure that was when my first bucket was created.

Disneyland was in California.  That was as far from Brooklyn, where I grew up, as being on the other side of the universe.   There was no way I would ever be able to get there.  No matter how many stars I would wish upon, there was no way.  No wonder that bucket went into hiding.

Life went on, and for me there were many years of hiding.  That is the story in my book, but as I grew up, there were other buckets for impossible dreams that were also created.  There were concerts, festivals, shows, and places to go, that for so long seemed like they could, or would never ever happen, for so many different reasons.

I understand why when people start to age and it appears that they no longer have as many familial responsibilities, there is urge to access those lost dreams and make them come true.

I have reached that point but it is so interesting that it is not just a single bucket that I am finding, but rather a barrel full of buckets. 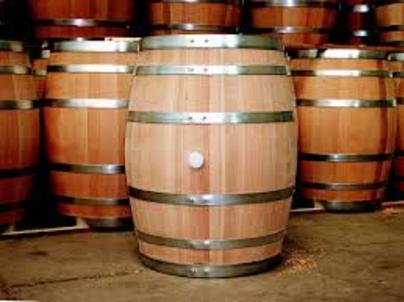 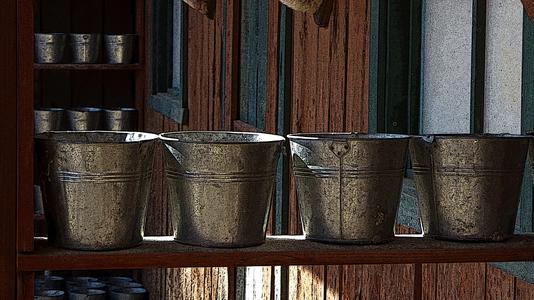 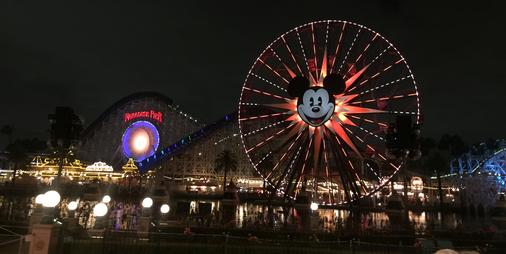