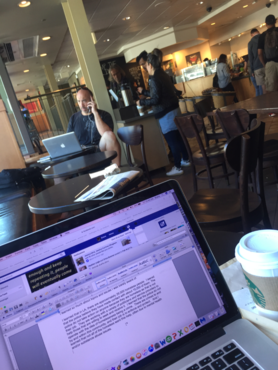 I spent a good 2 hours writing a few blogs and posting them.   Even though I have few local Starbucks where I live, I have never hunkered down at one before to do this.   I was multitasking as I had my iTunes on shuffle mode playing in my ears.  It was just like home, as I realized I may be evolving into a road warrior of sorts.

Once I posted the blogs, it was around 12:30 and I took a walk around the store and then down the promenade to find something to eat.  I grabbed a slice of pizza, and checked out what was playing at the movies, for future considerations.   I then headed back to the apartment to get my stuff to go to the beach.

​This Friday was planned to be a day without Uber, and although it had some structure, it seemed that it would be one primarily spent just hanging around.   I know, that I have many, many of these the of days, and suspect that you are also familiar with them.  However, it seems that being on a trip for a month, there is always some specific destination in mind and somewhere to go, someone to meet, or something to do.     Even on this day I had a few planned items but all in all, I still feel that I experienced a long lazy day.

​Actually it started early as I needed to get on a 90 minute conference call at 6:30 AM here in Santa Monica.   These are calls that I am on every few weeks that are never an issue as they are scheduled for 9:30 Eastern Time.   Being here on the left coast added a little challenge this week.    It was video con call with about 18 people on it.   I threw on some clothes so I did not look like I hopped right out of bed.  I found it funny to hear people in central and mountain time zones complain about how early the call was.   Yes, anther example of perspective at work.

​As you remember my stop here in Santa Monica is at a room in an apartment, so when the call ended I thought I would do my laundry,   Yup, after 20 days on the road, this was well needed.   So by 10 AM, I already had a day behind me, but had not yet put any coffee into my system. 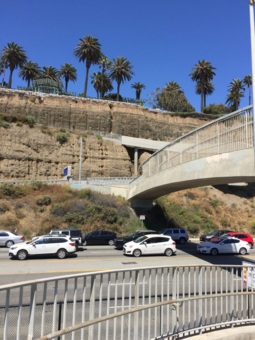 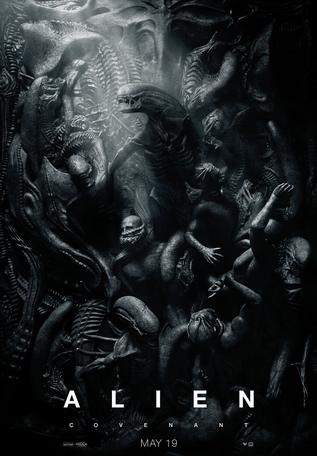 Just to finish off the long lazy day, I went to grab dinner at PF Changs, and get my share of lettuce wraps. I found I still had time to catch the opening day of the new Alien flick.  It was pretty good, and tied a lot of the pieces that were hanging out after Prometheus, together.    It is still true that in space, no one could hear you scream.   There was scattered applause in the theater at the end.

​As I was walking back to my airbnb, I was also applauding my long lazy day. 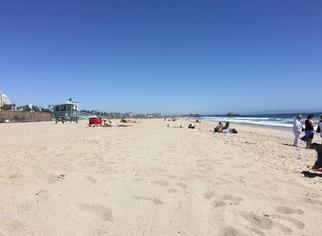 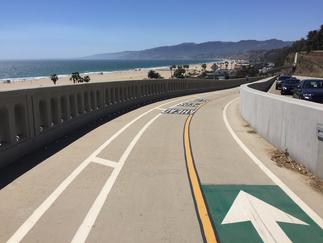 There are coffee shops everywhere in the neighborhood.   It is a nice experience not being in big hotel, and actually just walking down streets and seeing people walking their dogs, taking kids to school, jogging and riding bikes.  The voices in my head are having an ongoing debate how it might feel to live in this neighborhood, just blocks from the beach.  They have not as yet reached an agreement!

​It was still early, and I wanted to catch up on my blogs, so I thought I would hit one of the local Starbucks - yes, it seems they are on every other block here.   The one I chose was in a Barnes and Noble, but they actually took my Starbuck App for payment.  I know I have $$$ in the account, but it is always nice not to have to reach into my wallet for cash.​​

I walked down California and found the path/ramp down to the beach.  It ws long and windy.   You can see the way I saw it as I was walking down it on the left, and what it looked like from the bottom on the right.  The best part about my traveling days is that there is hardly a day that goes by where I have not walked at least 5 miles (according to my iPhone)

​It was a long wide beach and crazy windy.  It reminded me of Les Mistrals in France - the winds that made Van Gogh crazy.  There were some swimmers in wet suits, although I did not see any surfers where I was hanging out today. I put my toes in but the water was frigid.

There were people there and coming throughout on this Friday afternoon.    I stayed for about 2 hours enjoying the sand the surf and just being able to lie down on the beach and let the music keep shuffling in my ears  (I love my iTunes library) as the wind was blowing.

​One song popped up that I don't often here - this is why I love shuffle mode - that just seemed so appropriate for this trip and the present time of my life.  I am happy to share it with you here on the right.​